ZombieV is a Minecraft Minigame that I have invented, developed, and published to thousands of players via the Snapcraft gaming network from the Netherlands. It is written in Java. The concept is simple: players fight together against pre-defined waves of crazy enemies. By killing those enemies, they get money, which they can invest and stronger armor, weapons, and some other special perks. Besides a lot of crazy fun elements (items like grenades, an interactive map which, for example, changes over the course of the game, and boss waves) players could also use the equipment they unlocked to challenge other players in a 1v1 fight.

Around 2012, I was playing the game Minecraft and running my own minigames server. I honestly do not remember how I got the idea, but I decided to develop „ZombieSurvival“ minigame by coding a Java plugin with that functionality. The features were, basically: there are hardcoded enemy waves (e.g. wave 1 is 10 zombies with certain health spawned at certain locations, wave 2 is 4 endermen with a lot of health and special damage, etc.). Players can join the arena at any time. If the arena is currently empty, it will start with wave 1, otherwise, the players just join at the current wave. They get money by killing enemies themselves (plus some money for kills of a nearby player), which they can invest in new equipment. This equipment and its cost also was hardcoded and defined by me. If the players survive all waves and kill the final boss (last wave) they get a lot of money as a reward. And that is, basically, about it. Starting out with a really bad map, limited waves and really bad code, the minigame evolved over time. In the beginning, this ugly squared place was the map:

I kept adding new waves and features every day. Eventually, I met the Swedish gentleman David and merged my minigames server (custom plugins) with his server (bigger player base). We created the network named „Zeuby“ and had around 40-90 players online at once at this point. The ZombieSurvival map, I built, looked like the following:

I became more and more ambitious and started adding new features such as artificial players (NPCs) as enemies, which behaved and moved like regular players, using something that was my first attempt in trying to implement artificial intelligence. In order to move through the environment properly, they used the A* Pathfinding algorithm.

Many other features, of which I will only list a few, were implemented, such as the possibility, to purchase a wolf, which would follow you within the arena. You could upgrade the health, damage, and other attributes of your wolf, select one of many different special abilities, which could also be upgraded, and also ride on your wolf while fighting. Also, players could select one of the multiple different super weapons (e.g. bow with explosive ammo, a sword that can shoot fireballs, an axe with an extreme attack). They could give their weapon a name and enhance it in the so-called Forge.

Due to different reasons (described in more detail in my EarthGames article), I joined the gaming network Snapcraft, owned by Bas and Maarten from the Netherlands, and became Developer, Administrator, and Partner of Snapcraft after some time. There, with the useful feedback of Bas and Maarten, I have improved the player experience of the game a lot. In the beginning, ZombieSurvival shared its server with the minigame EarthGames, but we quickly came to the conclusion, that it would make sense to move ZombieSurvival to its own server too, in order to properly address the needs of the player base (server reaction times). As we had anticipated a lot of ZombieSurvival changes and the codebase was not that good either, at that point, I decided to rewrite ZombieSurvival from scratch. Now, with the new code, multiple arenas were supported and I have realized other crazy ideas too, such as sound effects, fireworks (e.g. when a wave is defeated), a new shop, crazy waves (such as many enemies stacked up on top of each other), an interactive map (e.g. a solid tower that moves and can shoot arrows).

Then, finally, ZombieSurvival was released on its own server in 2013, being called ZombieV now. It was accepted by the players quickly and running quite successfully.

As more and more players joined, we added new arenas and I implemented more features. 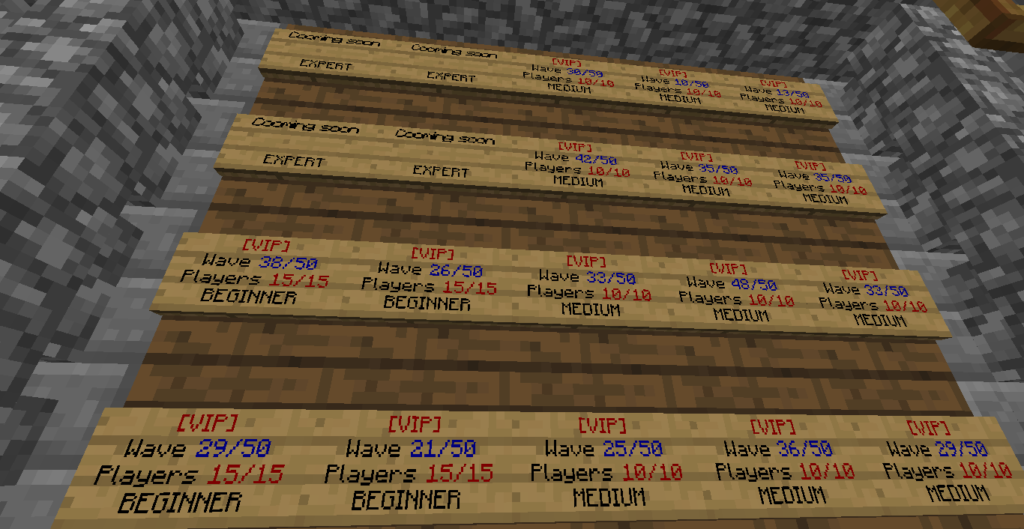 How the story continued

Having achieved my goals and successfully completed my minigames, as well as enjoyed a large player base, I lost interest in the game Minecraft and, eventually, stopped playing it. I continued to update my minigames until competent maintainers were found and I must say that they have done a great job. As Snapcraft kept evolving, so did ZombieV. Nowadays, it looks very different and even more sophisticated:

A quick overview of the 1v1 fights

Players could challenge each other to a 1v1 fight on the ZombieV server. In that fight, they can use all the equipment, which they collect during playing ZombieSurvival.